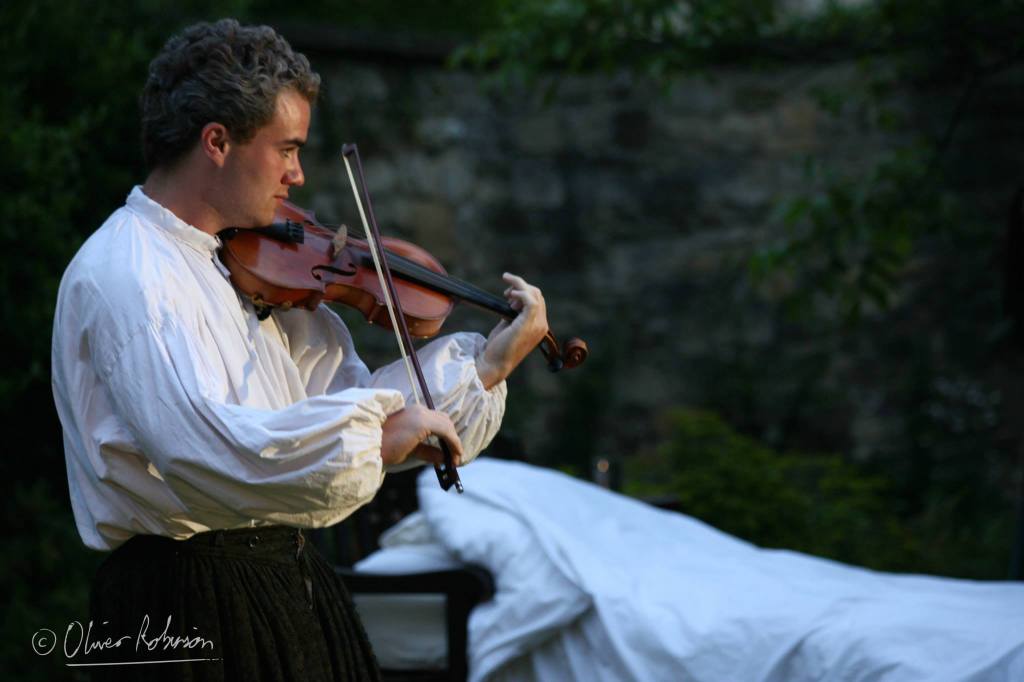 The production team are delighted to see Thursday, Friday and Saturday performances of Othello sold out, with 95 tickets selling online and – based on yesterday’s turnout – a further 50 per night being sold on the door. The culmination of a successful marketing campaign – where the team learned the central importance of continuously streaming images of rehearsals, preparations and production to the target audience – has transformed the Cathedral Garden into a true spectacle, with over a hundred people watching our cast play into the dusk. This is the first outdoor production that director-producer duo Luke Howarth and Andrew Hall have brought to fruition, and presented novel challenges too for the technical team Alex Grew and Mina Ebtehadj-Marquis. Nevertheless, the entire group is keen to work outdoors again in the future. In an exciting twist, the production was delighted to be joined by Shakespeare veteran Jeremy Irons in the audience for their closing night, his praise a fine reward for the hard work of the eleven-strong cast.

Reviews from Cherwell, The Oxford Student.

Production on Othello steps us this week as the team see the launch of their marketing campaign to sell 400 tickets in the remaining fortnight before the play’s opening. With design from Laura Whitehouse and strategy by Isis magazine’s marketing coordinator, the campaign looks set for success. The production team worked hard with local media, and have restructured the traditional trailer-flyer-website approach to theatre marketing, bringing in broadcasters from Cherwell to create a behind-the-scenes preview, and launching an aggressive online campaign in preparation for one week of intense flyering.

“By creating alternative media interest ahead of our print marketing campaign,” said marketing director Love Hedman, “we reduce the need for large expenditure on excessive flyers and leaflets, whose purpose should be to reinforce a brand already well established in the city.” The team also took the decision to keep the production’s creative decisions under wraps from the other newspapers in town, both to drive traffic to their video preview and to place emphasis back on press reviews of the show itself. “We want people to care about the reviews,” said Love, “rather than have previews give our audience any preconceptions.” Holding back on the flow of creative information was also integral to the production’s strategy to make Shakespeare – often seen as an Oxford cliché – as accessible as possible. “We want people to be surprised,” noted producer Andrew Hall. “You can always reinvent Shakespeare, even when a production like ours is traditional in style. Overly detailed previews rob some of that sense of discovery from the audience.”

One member of the review community who will be welcomed with open arms, however, is the Guardian’s legendary theatre critic Michael Billington, who will be hosting workshops on Othello with the cast in the run-up to the show.

Tickets are available at http://www.wegottickets.com/OthelloChristChurch now.

Hosted in Christ Church Cathedral Gardens for a run beginning on the 4th June, this promises to be a tremendous production incorporating the best of Oxford drama, the spectacular setting of the ancient college, and the energy of an experienced director with a powerful vision. Tickets for Othello are on general sale now.