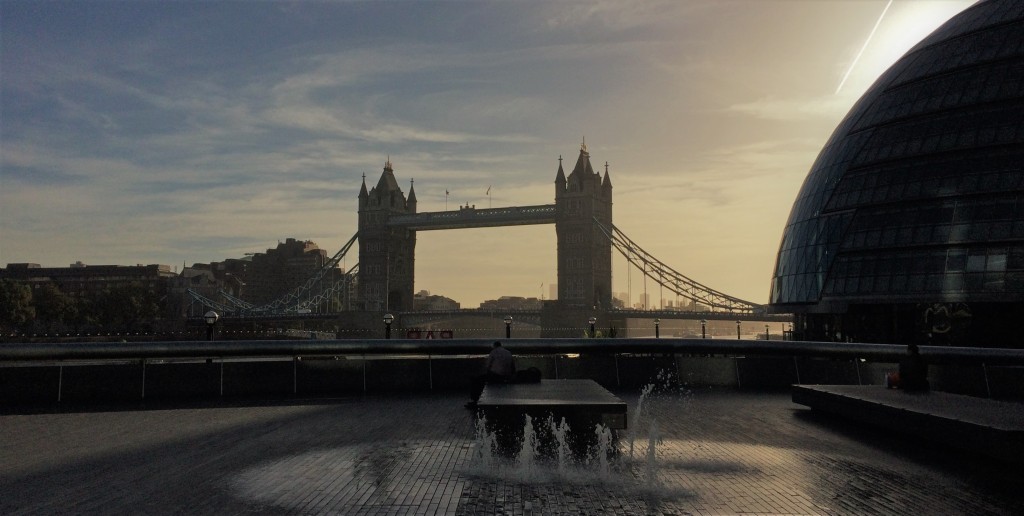 On Lily’s recommendation I had the pleasure of watching Tamsin Greig in Shakespeare’s Twelfth Night broadcast live from the National a couple of weeks ago. As I was walking to catch the tube home – oddly, from the sweaty but fantastically full cinema into which I’d crammed myself and towards the NT itself – I looked out across the Thames for a moment and realised that London can be brilliant.

London, particularly as the weather gets better throughout the spring, is a city built on bars and cafes. These serve up the lifeblood of a writer: caffeine and alcohol, and also people, characters. Nobody can deny the city is overwhelming at times: I currently work a stone’s throw from Leadenhall Market during the day and oftentimes London just feels like a grey meat-grinder or a grape press, searching for every last drop of energy you have and taking it away. In fact, it’s this side of London – something I see every morning on my backwards-commute from Canary Wharf into town – that is the driving force behind a poem I am writing about my home.

But the sense of never-quite-belonging created by this relentless town is food for the imagination. It’s the upshot of a scary gamble people make when they move from the countryside. In villages, you have everything: tight-knit communities and a steady regularity to the world, which brings you a safety net that allows you to focus on ideas. But creativity can become stale when its creator isn’t forced to change. The grind of London, on the other hand, won’t let you rest, won’t let you engage on your own terms, and that can encourage you to use writing, film, art, dance as a response to what the city hurls at you, and as an attempt to make your mark against its walls. And the city gives you so much material to work with. Some of it can be expensive, but always worthwhile (the National, the Royal Court, the Royal Opera House all show you treasures you will never forget) but an awful lot of it is free too: the British Museum, the Tate, the National Gallery, the parks, the myriad small galleries, antiques shops, bookshops, dance studios and theatre spaces around the city.

London definitely needs better public libraries, and that’s something I would urge our councils to focus on. I was lucky and grew up surrounded by writing, and then I was spoiled rotten in Oxford, a city built out of books. But everyone deserves a good library; they’re like a farm for the soul. But even while that’s being discussed, let’s not forget the wonders that we already have here. I’m looking forward to discovering new places to read and write of my own as we slowly roll into the summer.