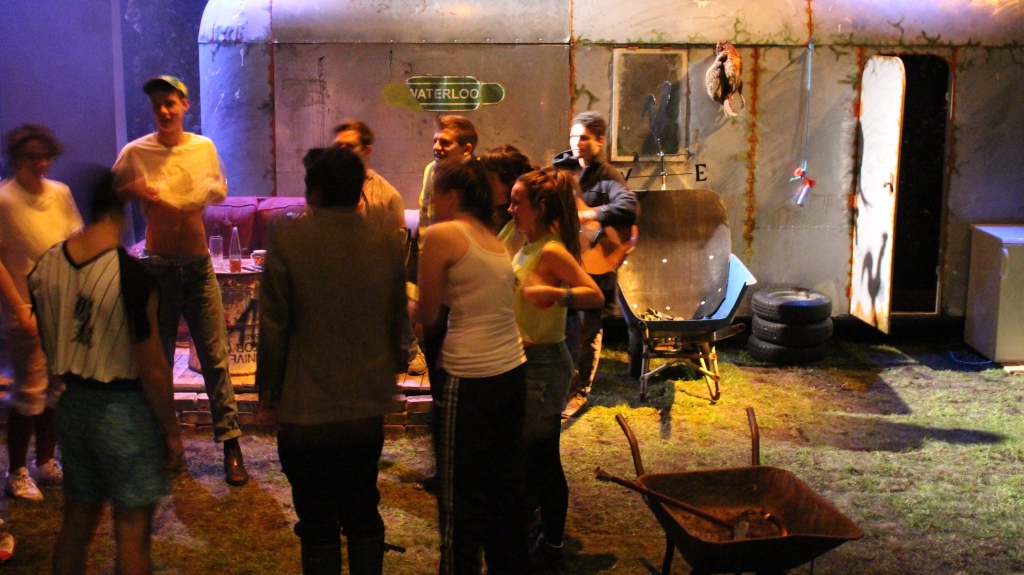 “Triumphal”, the Oxonian Review of Books declared. Trumpet-blowing in the theatre business is something to be frowned upon, particularly when (as is so often the case) it detracts from the energy a team can spend on improving their production, and when it leads to projects being picked up which would otherwise remain untouched for very sensible reasons. Nevertheless, the 5-night run of Jerusalem at Oxford’s O’Reilly Theatre this week set incredibly high boundaries for success on the performance, design, technical and finance fronts, and to see the show thrive in all four areas has been my proudest moment as a producer.

The setting, drawing almost £3500 from Commensal’s production funds and the team-member investment system which has made this group so tight-knit as a vehicle for delivering projects, included hundreds of metres of camouflage netting, an aluminium caravan and a stage worth of turf, not to mention the problems presented by the show’s two live chickens. “A carnival of sensory delights”, the show was labelled in its 5-star Oxford Student review. The heavy financial burden was worth every penny, transforming a difficult space – which includes one entirely naked concrete wall stretching up two storeys – into an English forest. When presenting the concept, it is understandable that none of the team could grasp just how real its delivery would be.

Such spending raised the bar in terms of necessary returns, and the show broke all expectations in selling out four of its five shows entirely, and drawing almost 70% capacity on its Saturday matinee. The reason for this was not pure chance, and the team built on lessons learned from Othello and ’Tis Pity, where large casts of impressive talent delivered record audiences. Similarly here, with Barney Fishwick in the lead and a cast of heavyweights in the city’s comedy and theatrical scenes, a dedicated and energetic group of talent draw audiences. They also, and this is at the heart of my pride in producing the project, delivered astonishing performances – described by a number of guests as the best student drama they had ever seen. On the final day, the cast took to the stage for almost seven hours in two performances separated by a ninety-minute break, and still drew gasps and grins from their audiences.

Official photographs from the event came from Oliver Robinson, while reviews have been published by the Oxford Student, the Oxonian Review, Cherwell and the Tab.