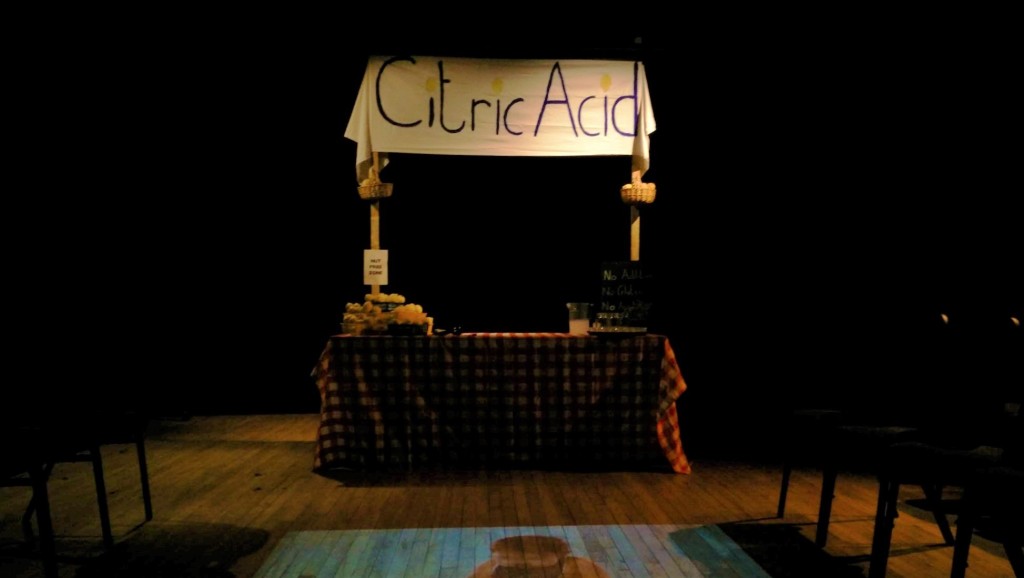 Completely selling out four of its five nights at the Burton Taylor Studio, new-writing comedy Citric Acid burst onto the Oxford drama scene last week with all the energy the cast and crew of the bizarre satire could muster. Audiences were welcomed with a sinister smile from their host for the evening at the top of the BT’s staircase, handed a shot of sugar-free, gluten-free, fair-trade, free-trade but-certainly-not-free lemonade, and bundled into their seats by a bouncer.

From there, forty-five minutes of moving, intriguing and unsettling comedy ensued as the owners of the lemonade stand, Ben and Alice, encountered a stream of East London residents, from haggard business-people to obsessive hipsters, Karl Marx to Harry Houdini. Reviewers noted the commanding force of the script, from Mina Odile and Alex Newton, and the set built by Alex Grew, and all admired a stellar student cast under the direction of Josh Dolphin.

Marking the first collaboration between the veterans of the Commensal production team and Dolphin, founder of Koma Kino Theatre Company, the project was a resounding success both onstage and on the production’s books. Funds from the play are expected to support several future plays from Koma Kino in Oxford, as well as recognising the importance of new writing through donations to literary ventures Notes Magazine and Oxford Failed Novelists.

With plans afoot for a potential Edinburgh transfer and several significant London-based film and theatre projects in the next twelve months, the new creative collective forged under Citric Acid is a team to watch out for.

Read reviews from The Oxford Culture Review and Versa Magazine.